The Rise of A Famous Canadian Hockey Painting About Canada.

“It was a bright Spring day and Stanley Cup fever was in the air. The lead up to the final had all the West Coast Canadian hockey fans filled with anxiety and enthusiasm about the potential of the Canucks bringing home the cup for 2011. Up to this point in my career as an artist, the sport of Hockey had yet to appear in my work. This year was different, on the tail of our Canadian hockey gold at the Vancouver 2010 Olympics, hockey fever was stronger than ever and it was hard to ignore the buzz. I could not ignore the energy and enthusiasm of everyone around me and Hockey found its way into my brain and onto my canvas.” This is the story of the rise of a famous Canadian hockey painting about the collective Canadian consciousness, featuring the iconic Dryden pretzel mask on the Canadian flag.

“I knew that I wanted to paint a goal tenders mask on the Canadian flag, but which mask should I choose and why? On my travels across Canada I have compiled thousands of photos for reference and as I scoured I came across the rookie mask of Hockey Great, Ken Dryden, whose mask resides at the Hockey Hall of Fame. I was taken with the character of the mask, as in Dryden’s day the mold of the mask actually resembled the shape of the players face very distinctly, so that even though it is beaten up with nicks and dents, you can still see his face whenever you see the mask. I developed a deep appreciation of how dangerous the game was for him back then, with the mask as proof, it is pitted so badly that it is a wonder his face survived the game. Impressive. I also read about the man, who was successful both as an athlete and businessman and has continued to re-invent himself. Inspiring. In the piece, the centre blue-line splits the flag in half. I have left this to interpretation as it has so many meanings and it all depends on the person and how much you know about the sport, the man and Canada. This painting marks the first in a series titled, ‘Iconic Canuck’, which I have been working on for the past decade. It began as my love letter to Canada, and this body of work keeps evolving and morphing, I am no longer controlling it, it is guiding me, it has become me.” ~ Brandy Saturley

Goalie’s Mask: red, white & Dryden, commonly referred to as ‘the goalie’s mask painting’ has become the most famous painting (perhaps the most important) in a body of work expressing an artist’s view of Canada from 2010-2020.  The painting has seen it’s fair share of recognition and attention in the realms of Canadian art and sport. Below we chart the journey which this painting has taken.

2010: Inception of the idea, influenced by Ken Dryden’s famous pretzel mask, the 2010 Vancouver Olympics, the Canucks near Stanley Cup win and the iconic painting by Georgia O’ Keefe, Cow’s Skull: red, white and blue as seen by the artist while on a trip to New York City at the Metropolitan Museum of Art in New York City. Late in 2010, the painting is completed. This iconic Canadian painting re-imagines Ken Dryden’s pretzel mask hovering above a Canadian flag, split by a dark blue line.

2011: the painting is juried into one of the most celebrated annual art exhibitions in British Columbia, the Sooke Fine Arts Show on Vancouver Island. 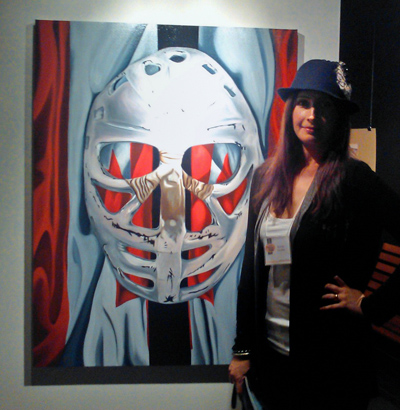 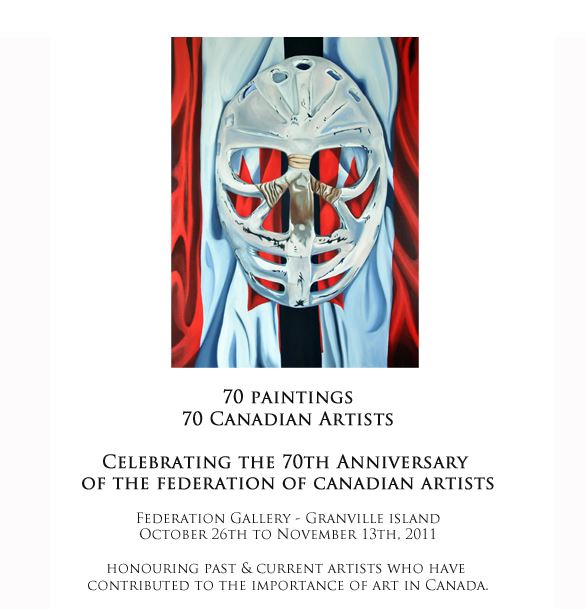 2012: Later this year the painting finds a home in the Hockey Gallery at Canada’s Sports Hall of Fame until Fall 2013. The www.goaliesmaskpainting.com website is launched with the support of The Hall and 29 limited edition metallic photo prints are sold, with a portion of the proceeds going to The Hall. 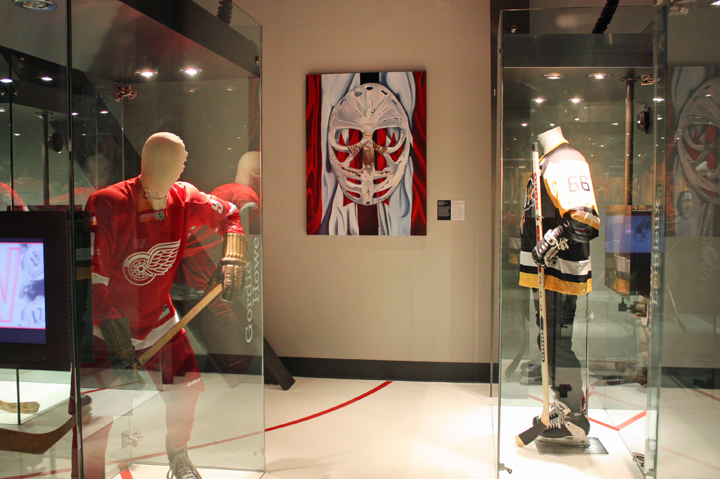 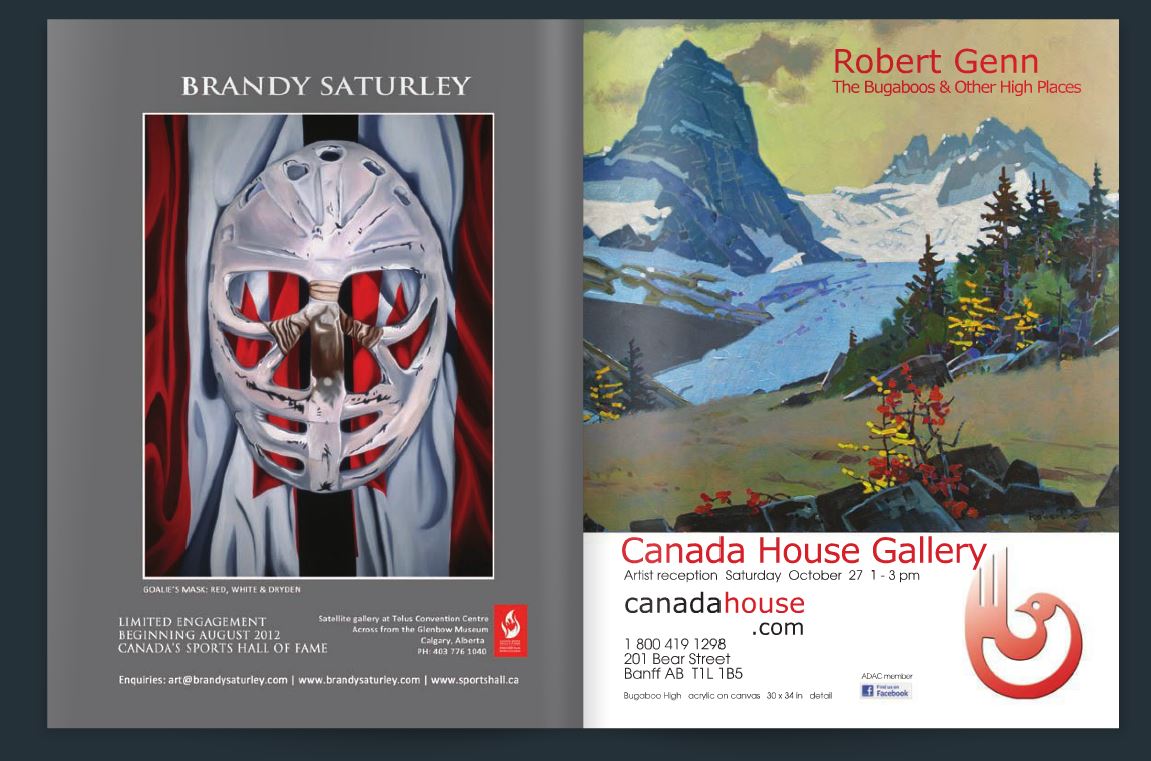 2013: Early in the year Saturley is interviewed by AllHabs hockey Magazine about the goalie’s mask painting and her paintings celebrating Canada. Following this Saturley’s work was featured by several websites including; DennisKane.com, A Portrait of the Visual Arts in Canada, Canadian Art Junkie, Art Avenue Magazine, Visual Overture, Artists in Canada News and more. 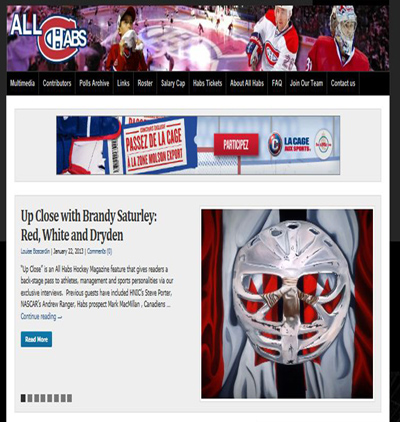 2013: In December, the goalie’s mask painting, which spawned a new body of work for Saturley is presented in a solo exhibition in Edmonton. The show finds a title, #ICONICCANUCK and 10 paintings are unveiled at this show, hosted by Visual Arts Alberta/CARFAC Gallery A. 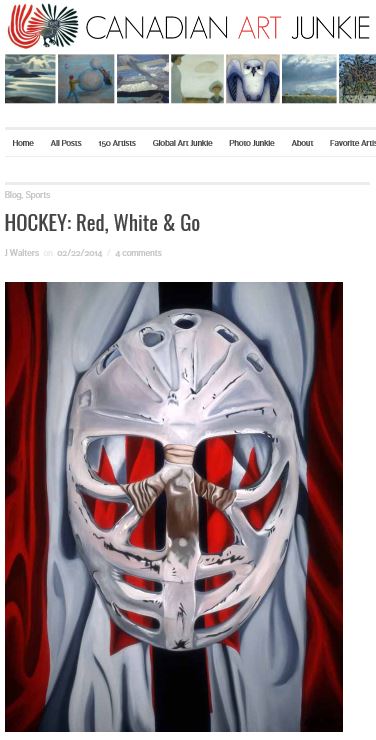 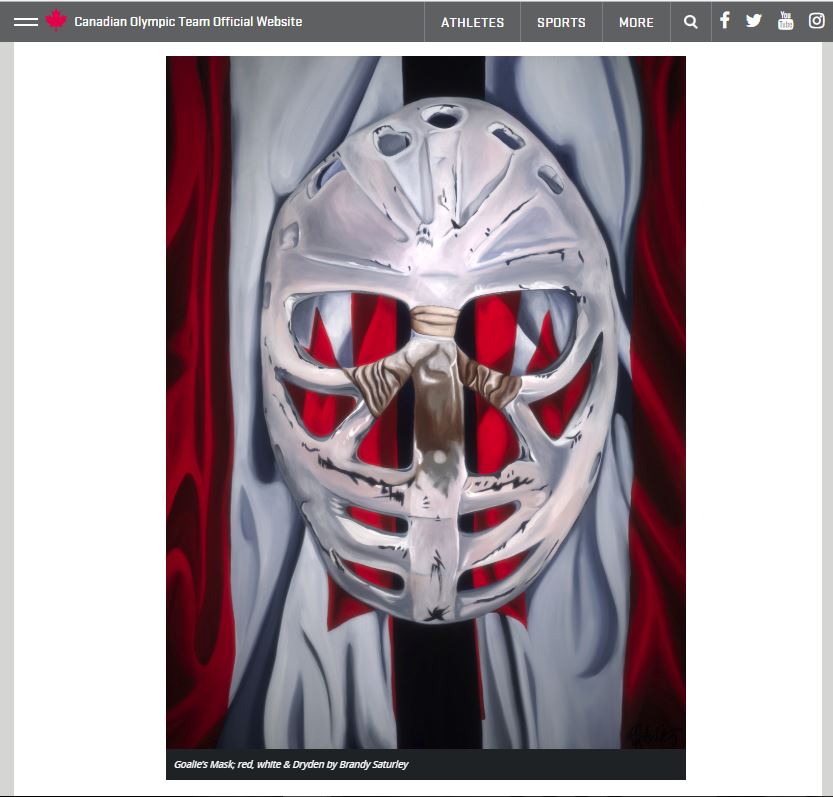 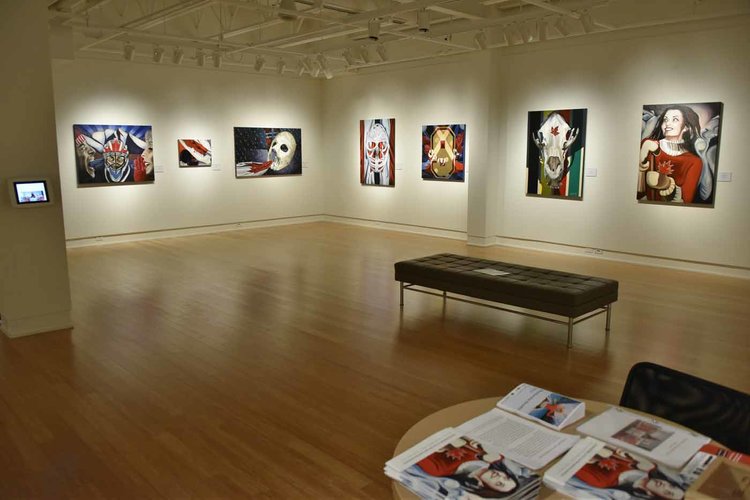 The second exhibition of 2017, was hosted by the Okotoks Art Gallery in Okotoks Alberta, just outside the metropolis of Calgary. This A class public gallery under the direction of Allan Boss, presenting solo exhibitions by many famous Canadian artists’ including Edward Burtynsky, one of Canada’s most celebrated photographers. Housed with an old CP Railway station, the venue comes with a considerable history and was an ideal location for presenting these paintings inspired by Canada. 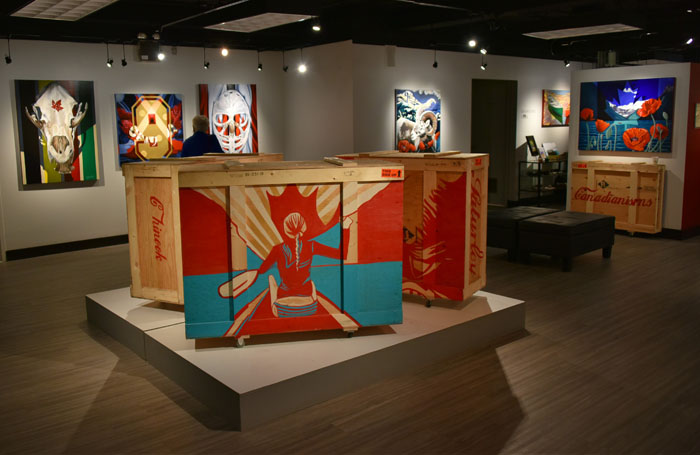 In 2019, this painting about hockey, and the collective Canadian consciousness, appeared in the short documentary film, ‘The Iconic Canuck’. Filmed over two days, inside the studio of the Artist, this film delves into the impetus behind Saturley’s paintings about hockey and Canada.

In 2020, the piece appears in the first virtual exhibition, during the COVID-19 pandemic – reaching a worldwide audience. 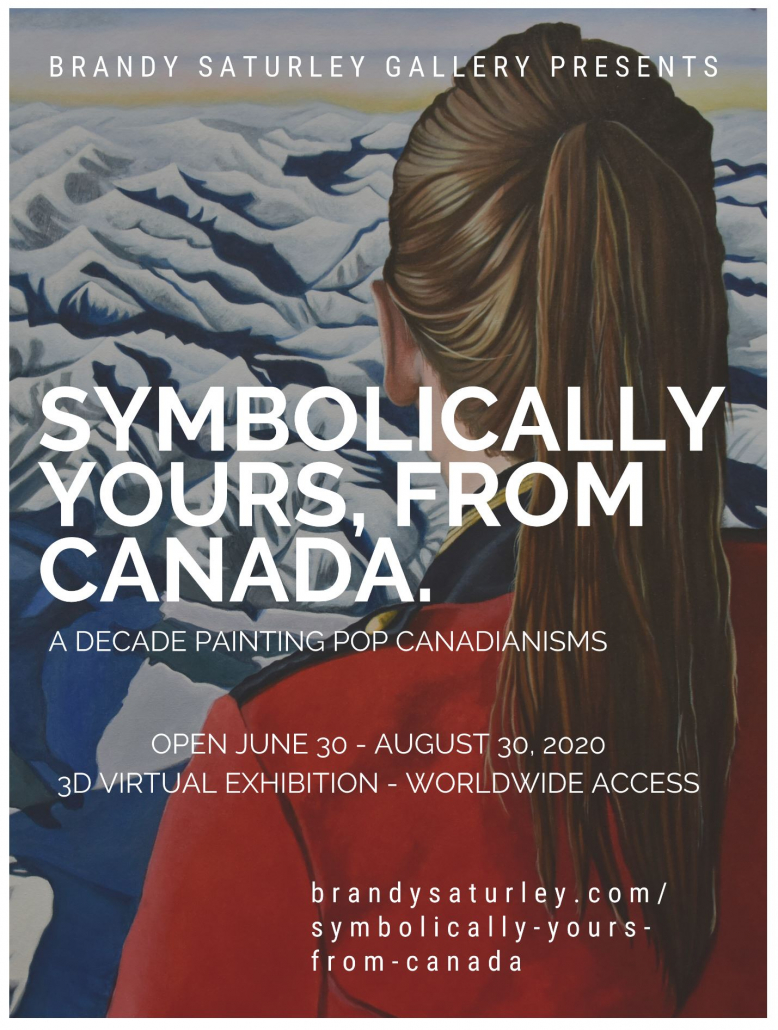