The Glenfiddich Artists in Residence Program – An Opportunity for Canadian Artists

The Glenfiddich Artists in Residence Program is unlike any other I have ever applied for over the years.  Set in the Scottish town of Dufftown, the Glenfiddich Artists in Residence program offers Canadian artists up to three months and $20,000 residency prize. The unique program offers a opportunity to collaborate with other celebrated international artists, while living on site and working at The Glenfiddich Distillery in Scotland. The most awarded whisky maker annually hosts a small group of visual artists from around the globe, who create phenomenal works using a diverse array of mediums including; print, photography, animation, performance and installation. The dramatic and historic setting, deep in Scotland’s highlands, has inspired a number of Canadian artists in the creation of original art work for well over a fifteen years.

This prize has been on my radar since 2006, when I first inquired about this International opportunity. At that time the curator, Andy Fairgrieve, was venturing into new territory and relying on Canadian galleries to put forth their best talent. Andy is a colourful, dreadlocked go-to-guy-in-a-kilt who has been privvy to the numerous submissions and ideas put forth by artists across Canada. I can only imagine what our Canadian artists have proposed over the years, and I am still waiting for the prize to select a painter. I know painting is considered by many to be an archaic form of art, and often not considered for a prize such as this as the common thought is painters can always sell their works and make money. Installation artists however, have to find private or government investment to back their projects, which often only last for the moment and not a lifetime.  Despite having had over 100 artists through their doors since the residency began, I am not sure if I have ever seen a painter grace the cottages at Glenfiddich.

As for our Canadian artists that have been awarded the prize, there have been many clever and engaging artworks produced. Many have graced the halls of OCAD University in Toronto, such as Vanessa Maltese, the 2018 recipient. Through research, she asks questions that explore the nature of art and perception. Her work takes specific an interest in the potential of ambiguous figure-ground relationships and optical illusions. In 2017, Lee Henderson who believes making artwork is every bit as absurd, direct, and fruitful as rearranging furniture just to see the pattern on the floor. Eleanor King took the prize in 2016, based in Nova Scotia and NYC, combining music, sound art, social practices, improvisation and other modes of creation, the art of Eleanor King is difficult to classify, but remains reliably enjoyable. In 2015 the were big blueprints required for the re-production of a work that could take flight. Jon Sasaki a Toronto-based multidisciplinary artist, whose practice frequently borrows Conceptual Art strategies, redeploying them in work with an emotionally resonant core. While his projects often employ both humour and pathos, they do so in the service of addressing the fraught and fragile nature of human interactions. For Sasaki, tragedy is an inevitable by-product of a practice that is aspirational at its core. An artist team from Vancouver shared the residency and the cottage, as installation artists Rhonda Weppler and Trevor Mahovsky took their talents to the distillery.

In 2013 my personal favourite, Daniel Barrow, used his analogue talents of sketching, stencils and projectors to create a series of narrative based works inspired by the town and the distillery. Jillian McDonald brought her photography and film talents to the landscapes of Glenfiddich in 2012, enlisting fellow artists in her narratives. Another female artist, Helen Cho work-shopped her thoughts into objects and the chronologies of history. In 2010, Alberta born Damien Moppett used his analytical and conceptual style to create a multitude of assemblage pieces, followed by Arabella Campbell in 2009. Campbell’s practice is consistently self-reflexive and produced with formal clarity. Her practice is informed by site-specific studies and conceptual based strategies, resulting in formally attentive works that are concerned with the fundamental structures of representation, as they are manifest in materials, language and place. In 2008, now jury member for the past few years, Toronto’s Dave Dyment created a work that honoured the whisky and the ultimate gift that the buyer would never sip. Dave’s unique project was inspired by his interest in the collapsing of time and the notion of artists planning a work which will not be complete until their lifetime has passed. A 500L second fill sherry butt full of new-make Glenfiddich spirit has been entombed in the ground at the Glenfiddich Distillery. Twenty-five empty bottles have been sold at The Toronto International Art Fair for CAN$2,000. Buyers can pass on the bottle for the liquid to be redeemed in 100 years’ time when the cask is opened. And the first recipient of the Glenfiddich AIR for Canada was Johnathan Kaiser, in 2007 during his stay at the Glenfiddich Distillery he was impressed by its picturesque Highland setting and the proud family history. He also enjoyed the romantic images associated with the brand like the iconic Glenfiddich stag and, being a bit of a Christmas fanatic, the fact that the first drop of spirit ran from the stills on Christmas Day 1887.

So what will the 2019 resident create while exploring the Glenfiddich Distillery and town of Dufftown? Will the artist be inspired to create a work based on the founder William Grant, who established the distillery in 1887? Perhaps a work based on the locations important to the town and the family, a town whose top employer is the distilleries themselves, in fact the distilleries created the town in the highlands of Scotland. The Glenlivet and Glenfiddich, come from Speyside. Strathspey has the greatest number of distilleries of any of the whisky producing areas of Scotland. Dufftown alone has six working distilleries with an annual capacity of 40.4m litres of spirit.

I have imagined myself roaming through the landscapes of the distillery, early morning strolls through the mist, the air heavy with peat. I have imagined the sounds of the stag that roams the land and appears on every bottle of Glenfiddich. I have imagined a narrative, and the paintings that would tell the story I have formed in my head. Whisky making is the life blood of Dufftown. From the farmers who grow the finest malting barley to the distillers and the coopers, without Whisky, Dufftown could no longer proclaim itself the “Malt Whisky Capital of the world.” I have thought about painting portraits of the people that make the town what it is, communicating their stories on canvas. There are romantic and surreal influences here, but also the opportunity to capture the cheer and revelry shared over a dram of Scotch.

Whatever the Glenfiddich residency inspires, there will always be an opportunity for a Canadian artist to bring their own voice to the doorstep of the distillery in the highlands, and we will look forward to what comes next. 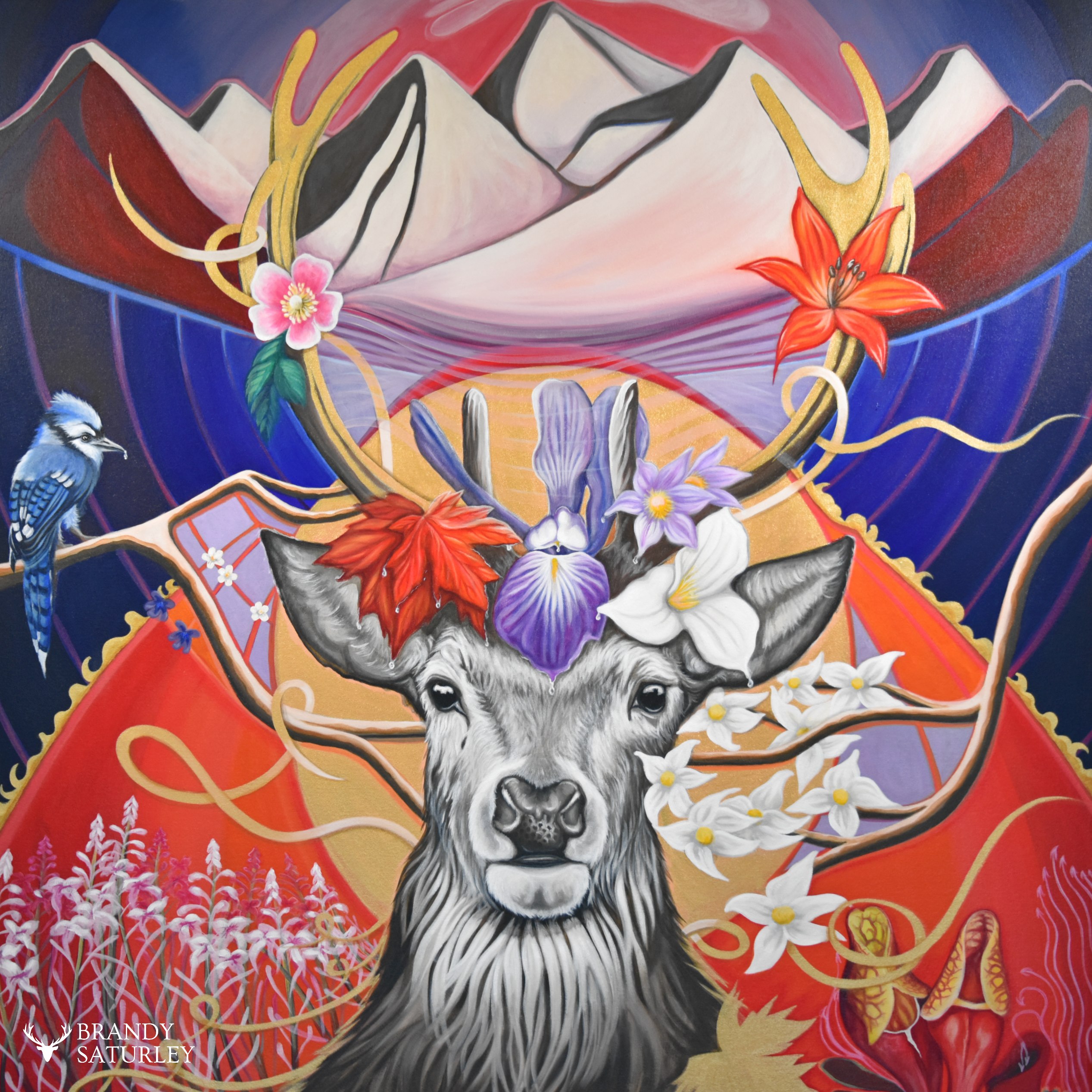